What are government documents?

Introduction to the Classification Guidelines

The U. S. Government disseminates a large number of publications each year. These may be issued as books, serials, pamphlets, maps, or other document type and may be in paper, microfiche, tangible electronic (CDs, DVDs), digital and online, or other format. Under U.S.C. 44, all of these publications, with certain exceptions, are included in the Federal Depository Library Program (FDLP). All U.S. documents that are identified, acquired, and processed through the Cataloging & Indexing (C&I) Program or the FDLP are assigned a unique SuDocs classification number and cataloged, whether or not they are distributed to Federal depository libraries.

The SuDocs system groups together the publications of all Government authors, with the various agencies, bureaus, and departments being considered the authors. It is based on the current organizational structure of the Federal Government; subordinate bureaus and divisions are grouped with the parent organization. Since the SuDocs system was introduced, new agencies have formed, older agencies have ceased, and organizational responsibilities have moved across agencies. Over time, the SuDocs system has been revised and expanded. As a result, publications of some issuing agencies may be located in multiple places in the scheme.

These Classification Guidelines will be published online only. Each section will include the date published and date last updated for reference. If you choose to print individual sections, keep in mind that the online version remains the most current and authoritative source for classification policies. Select prior guidelines are available in the Resources section under ‘Superseded Guidance.’ The Resources section is available from the menu on every page of the Guidelines.

Structure of the Classification Number

The SuDocs Classification Number consists of a class stem and a suffix. The class stem is a general designation used to bring related publications together. The suffix uniquely identifies a publication and differentiates it from all others classified under the same stem.

A fundamental rule in SuDocs classification is that each publication is assigned a unique classification number. In cases where an identical number would apply, a word, abbreviation, or number is added to the book number to differentiate the two. If a publication consists of multiple parts or issues, each discrete piece receives its own unique extension to the book number.

After the period, there is a number designating the series or serial title, or category of the publication, followed by a colon:

The letters and numbers after the colon represent the individual publication:

In this example, W 64 is the book number.

Spacing is critical for the proper construction of the class number. A space must be inserted between letters and numbers in the class number unless there is intervening punctuation.

Libraries can construct their own Superintendent of Documents classification numbers according to the principles outlined here. For documents falling in existing classes, find the class stem in the List of Classes. Add a Cutter number, date, or series number after the colon and an arbitrary designation such as “X” at the end to indicate that it is a locally assigned number.

Government publications are classified after they are received by LSCM; publications not received are not assigned classification numbers by LSCM.

SuDocs classes are arranged alphabetically based on the leading letter(s). The number between the period and colon is a whole number (ex. HS 1.2: comes before HS 1.15:). After the colon, the hierarchy of sorting is as follows:

In both the class stem and the suffix, an empty space will file before a space that has a letter or number (i.e. ‘nothing’ before ‘something’). The ‘nothing’ aspect includes spaces and punctuation, with the exception of the colon. This is illustrated in the following list with the example of Y 4.EC 7:S.HRG.110-646 preceding Y 4.EC 7:SA 9/2.

Example of a SuDocs Sort

Catalog of US Government Publications 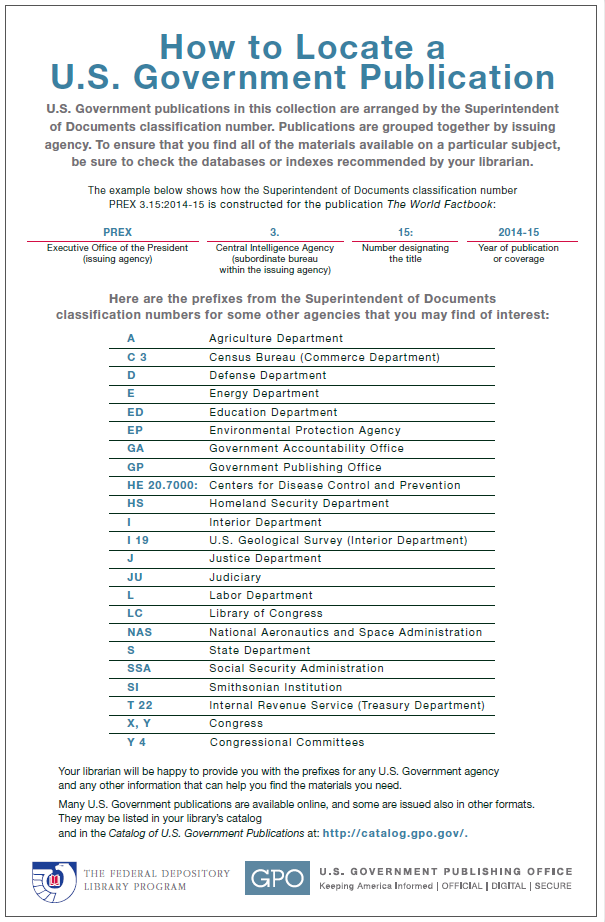 What are Florida Documents?

The State Library of Florida has two missions.  We:

The State Library, as part of the Division of Library and Information Services, has the privilege of serving as the information provider for state agency employees and the Florida Legislature and legislative staff.  Section 257.04(4), Florida Statutes, states that the Division “shall maintain and provide research and information services for all state agencies.”  The material in our collection is here to help the employees of Florida’s state government better serve its citizens.

The State Library has been building our Florida history collection for over 150 years. Many of our items are one of a kind, making this one of the most unique and comprehensive collections about Florida and Floridians in existence.

The distribution of the first edition of a Keyword-in Context Index to Florida Public Documents in the August 1969 Florida documents depository shipment created interest in the classification scheme used for state documents in the Florida Atlantic University Libraries. The scheme was developed in 1966 as an attempt to create a quick, economical, and practical alternative to the systems then in use in other libraries.

The classification code grew out of the knowledge that the agency-based scheme of the U.S. Superintendent of Documents had been used successfully in libraries for a number of years. Florida governmental agencies and their publications were examined in the light of such a possibility. This resulted in a four element classification code:

The classification code is completed according to the following schedule. Depending upon the "Type of Publication" number:

The second element of the classification is a number from the chart below which most nearly describes the type of document being classified:

The "type of Publication" designation uses a punctuation mark to separate it from the next element of the code. Originally, the mark was a colon ( : ), but for machine coding purposes, it was necessary to substitute the period ( . ).

The cutter number is formed by taking the first letter of the work to be cuttered followed by numbers for the next two letters (independent of each other) according to the following:

Conflicts in cutter numbers, arising from two different publications from the same agency on the same subject, are resolved by adding a slash and a number for succeeding publications or by cuttering one number away from the original.

Each agency within the Florida government structure is assigned a unique two or three letter code--usually an acronym for the department name. Divisions fall underneath with another letter-occurrence of a division depending upon its publishing activity.